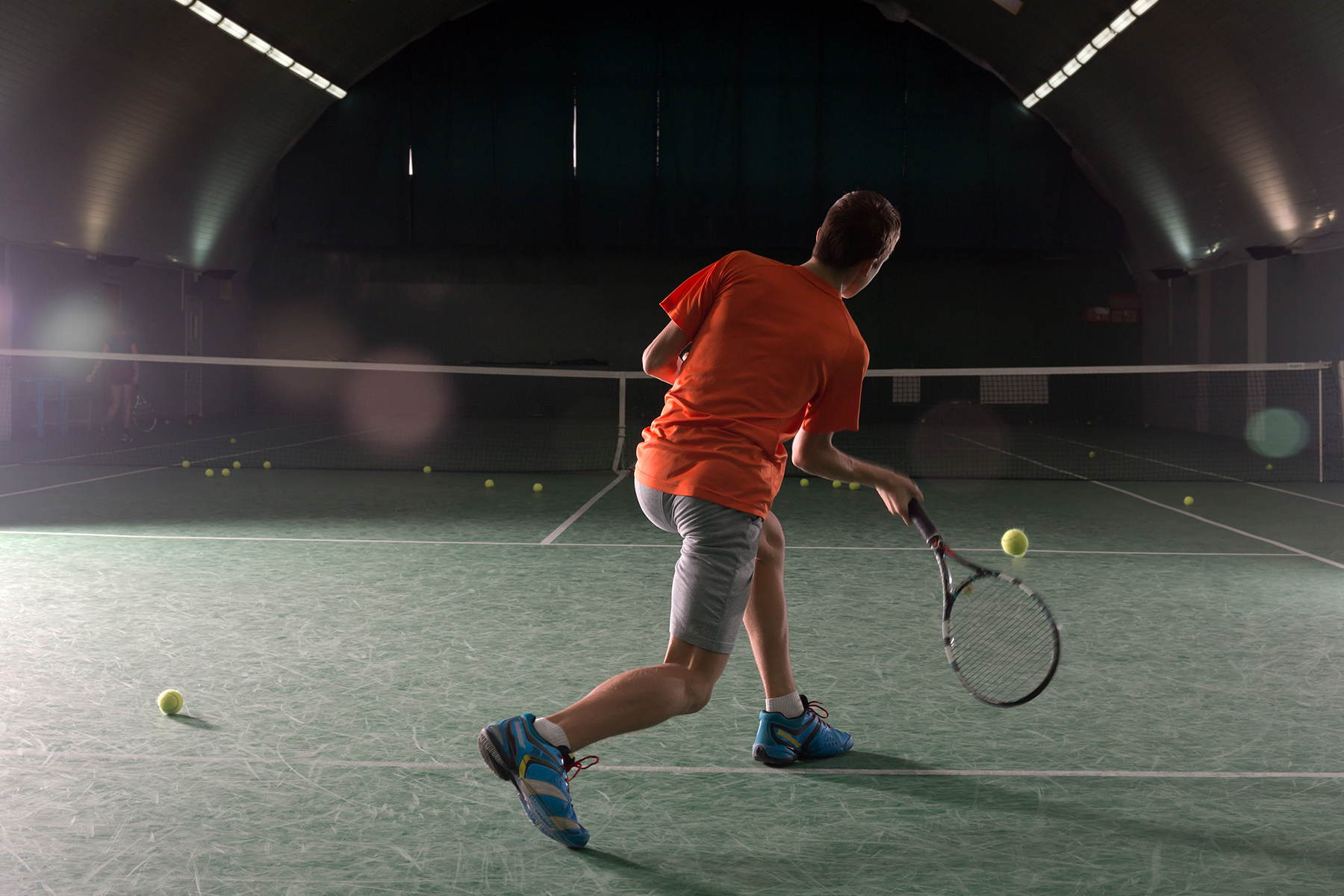 TV broadcast is the gold standard. The closer you can make your videos to TV matches, the more engaging they are. But of course, most of us have to make do without round-the-clock professional crew, floodlights, and ultra-expensive broadcast equipment.

The good news is that you can still produce excellent videos by dealing strategically with bitrate, bandwidth, and storage limitations, and by paying careful attention to these points:

First, get the fundamentals right. And that means ensuring your image is well-lit. Get a camera that has a large enough sensor, especially if you’re filming indoors. As a last resort, edit the video to correct for bad lighting. 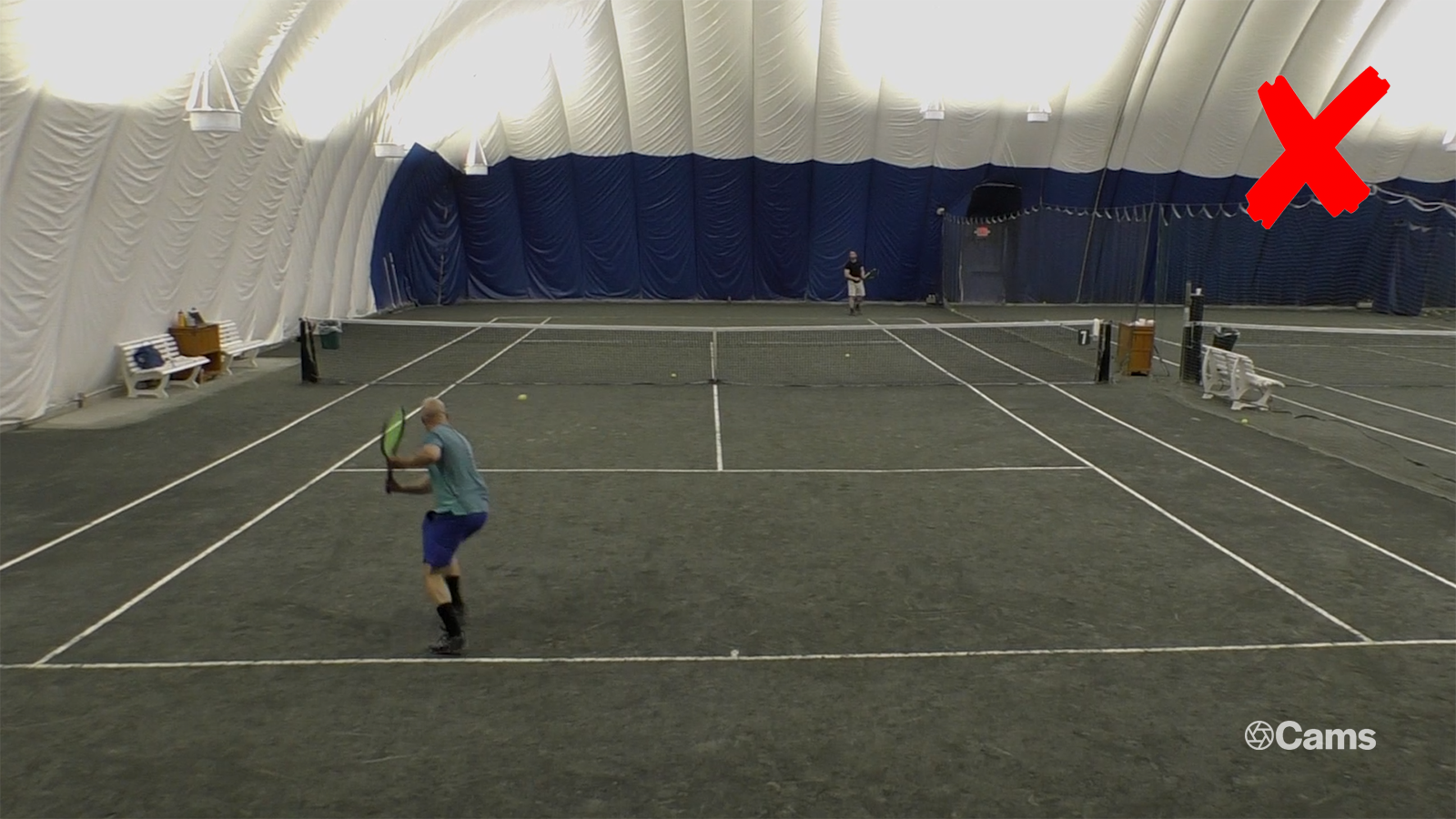 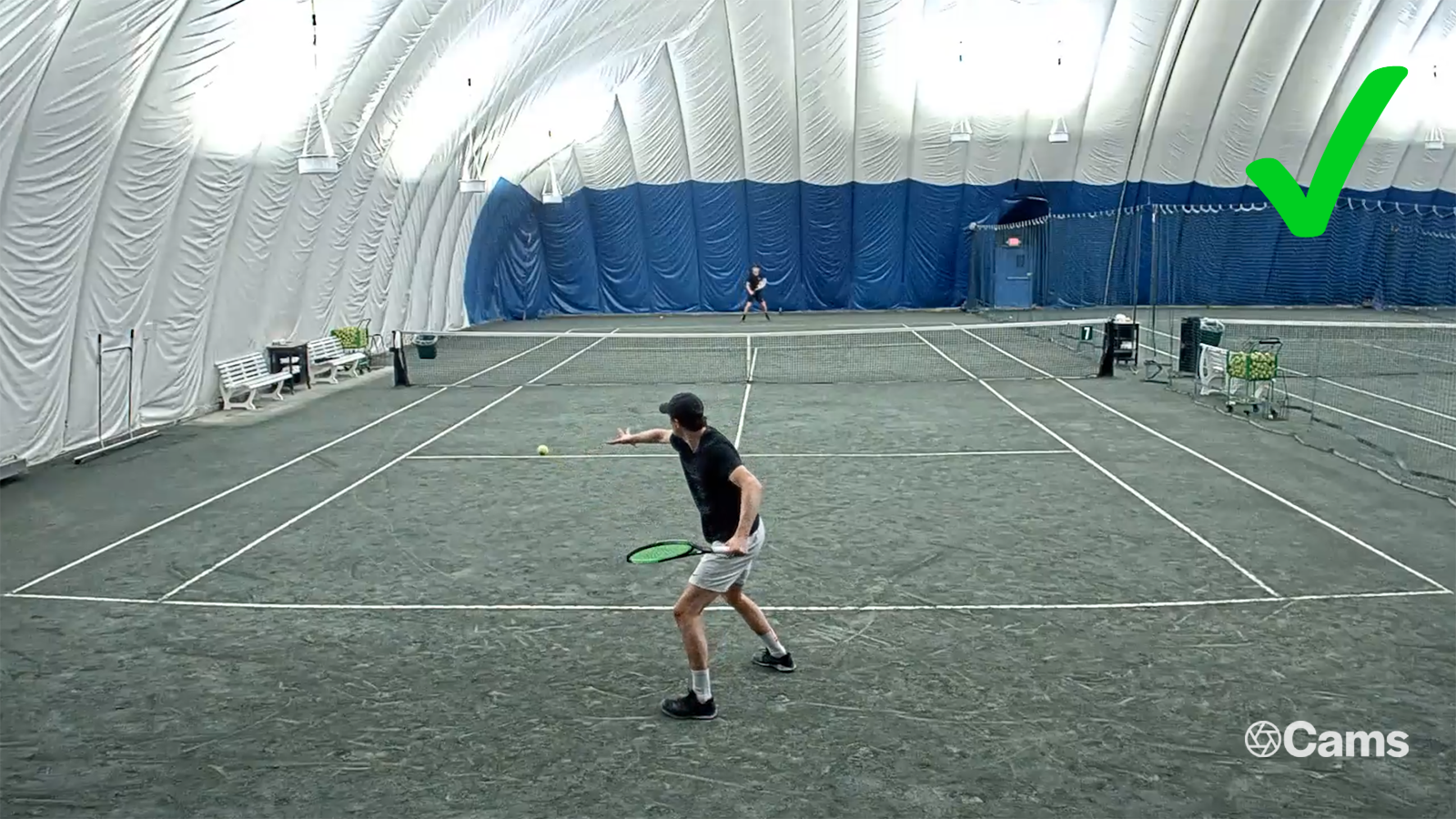 In terms of framing, your goal is to give the viewers images that look natural and balanced.

Make sure the court is perfectly centered and that the image is perfectly level. If your camera is slightly rotated, correct for it in post-production. Rotation correction is a standard service that we provide to our partner clubs. That way, no one at the club has to climb up the ladder to physically adjust the camera every time it gets hit by a ball.

Cover the entire court—do not let the doubles alleys get cut off. Get at least the near corners and at least 20 feet of the height of the backdrop on the far side of the court. You may have to utilize a wide angle lens, which brings us to point #2 below. 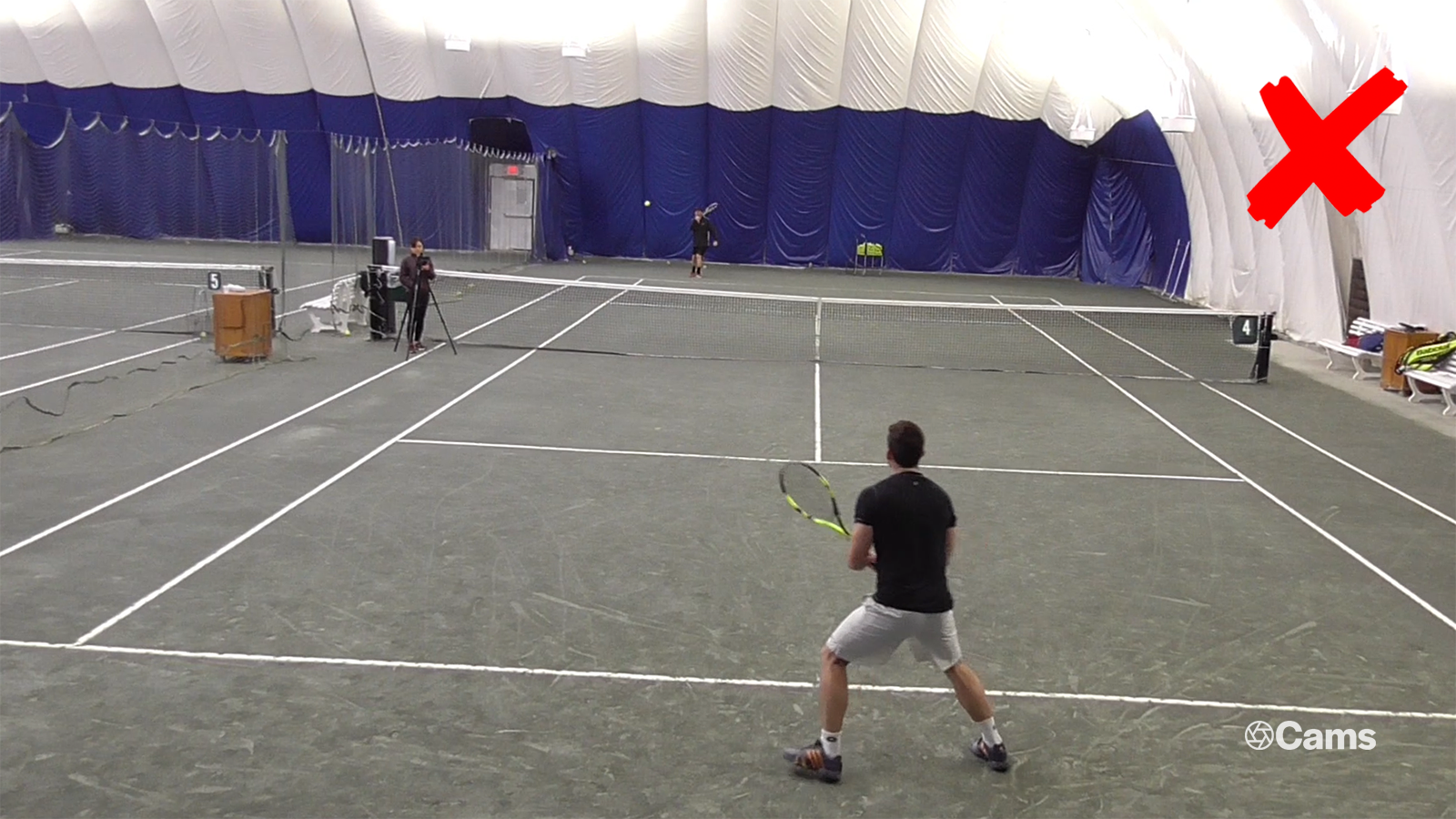 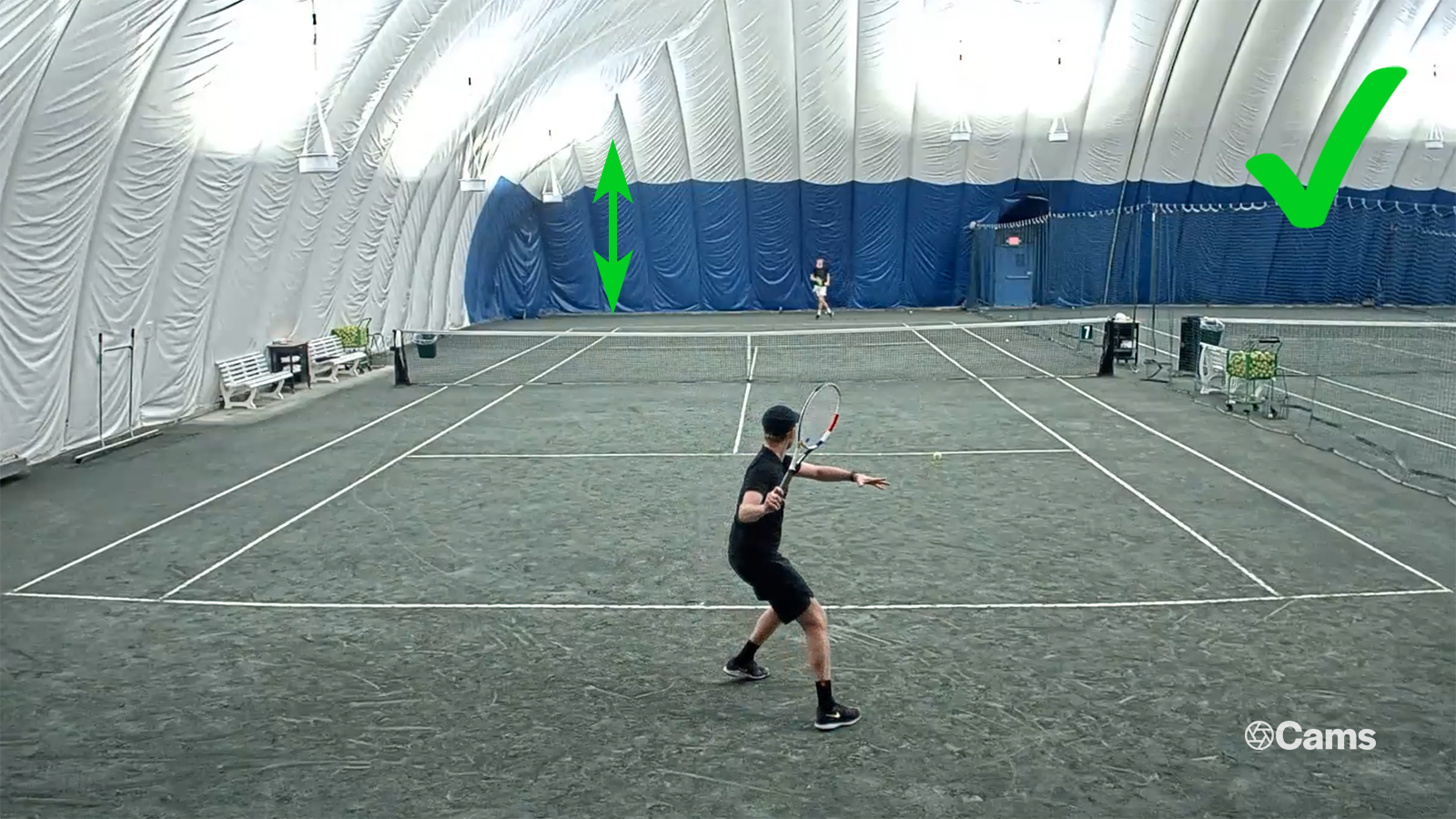 This is distracting to viewers—it’s not how tennis is supposed to look. Don’t forget, everyone’s reference—imprinted in the mind—is TV matches. Even worse, it reminds viewers of surveillance footage!

Since barrel distortion immediately diminishes watching enjoyment, you must correct for it. It is not always possible to remove it completely without compromising framing, but it’s always worth your best shot. Barrel distortion correction is another standard service that we provide to our partner clubs. 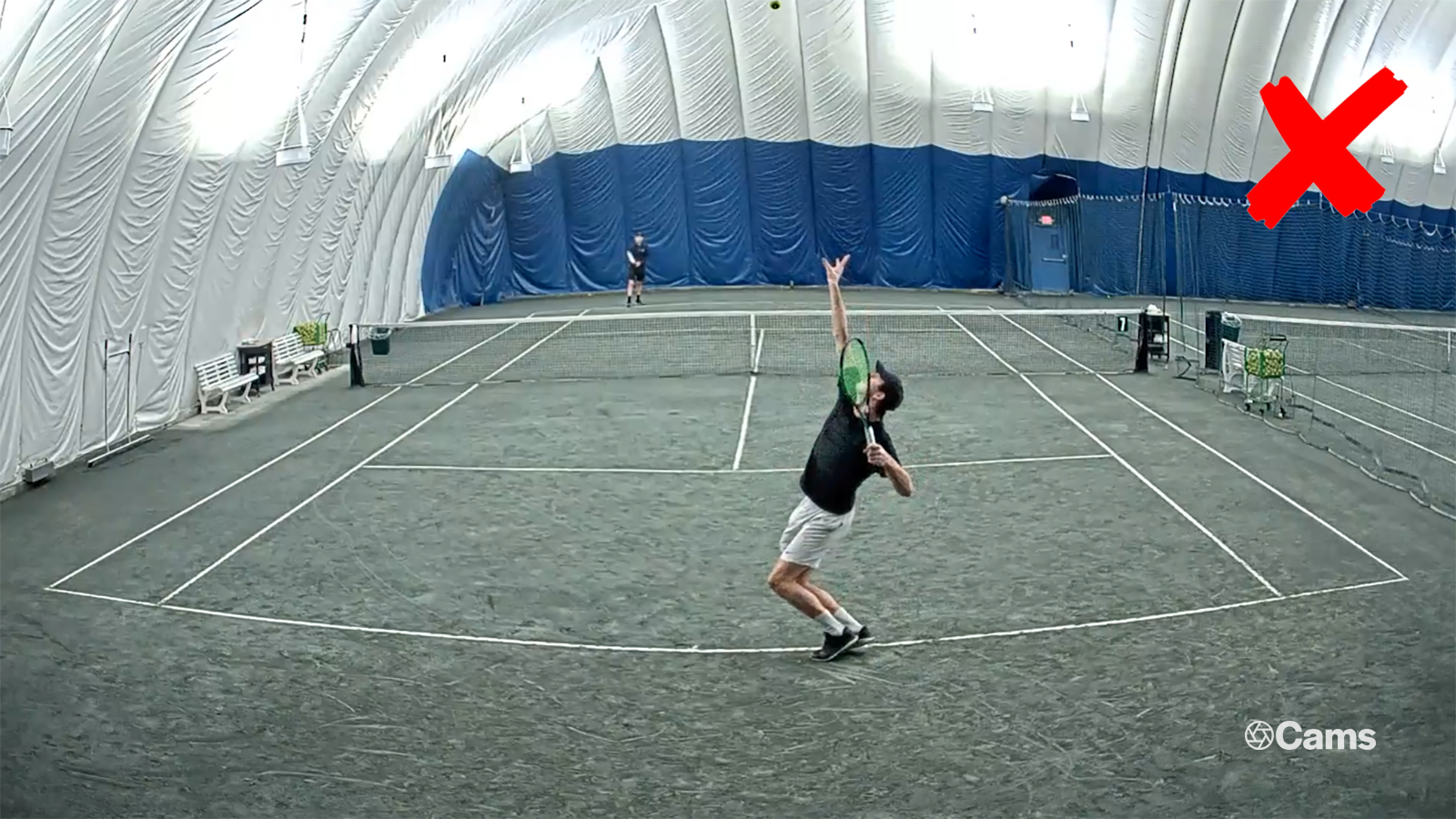 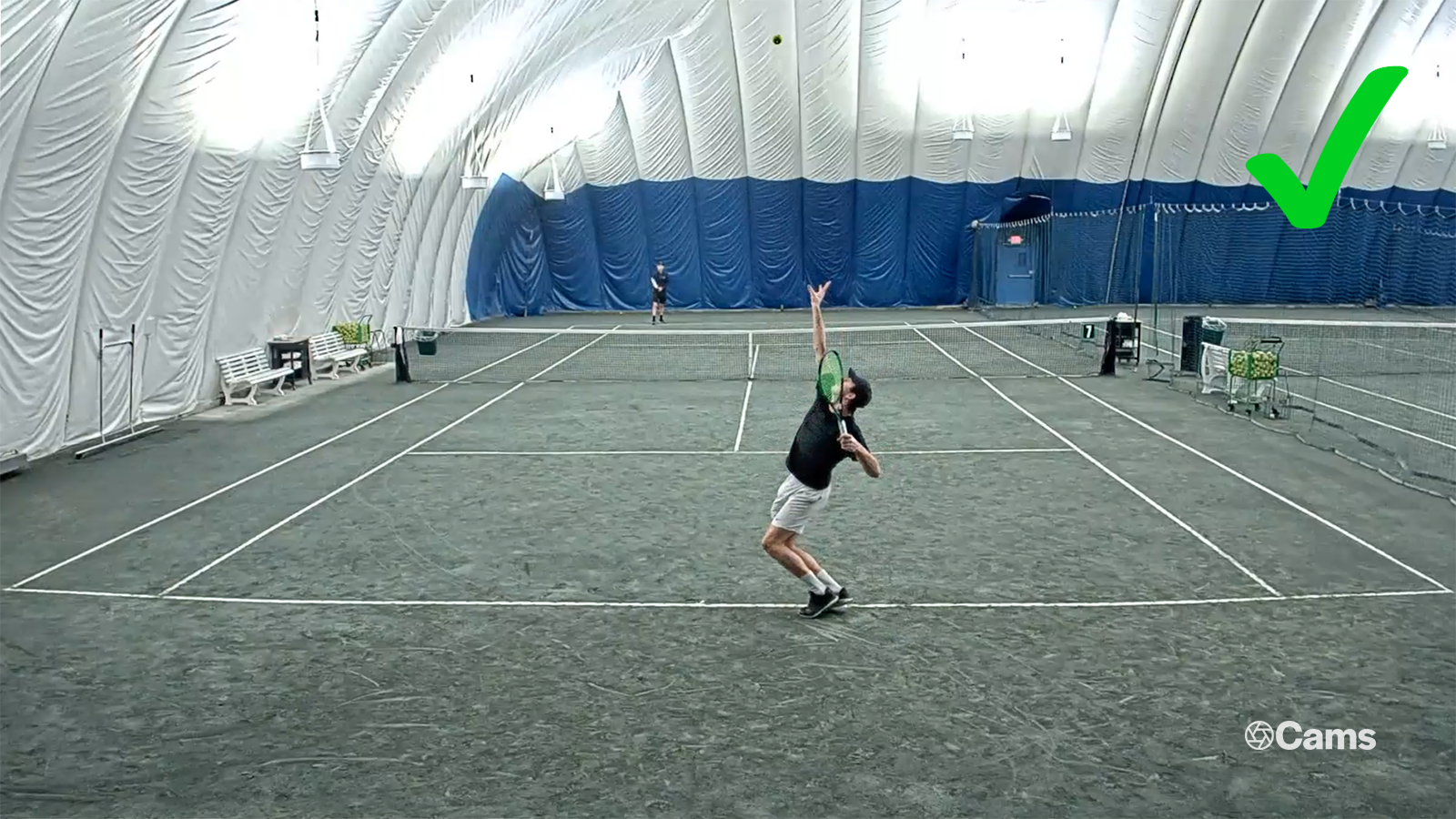 Players love high FPS for its ability to deliver a super slo-mo watching experience, which is especially useful for analyzing technique. They can step through the video frame by frame and see what is happening with the ball and the racquet at a given moment.

Nowadays, high quality, economical IP cameras that record at 120 FPS are readily available. A detail that many people miss, however, is that when manufacturers say that their cameras record at 120 FPS, you’re not actually guaranteed to get 120 unique frames per second. Instead, some frames may be duplicated to economize on video processing resources and storage. You may end up with only, say, 40 unique frames per second. This is obviously suboptimal as it makes the motion seem jagged when you watch the video (see Series A below). Depending on your setup, there may be ways to avoid this issue. Write to us if you want to learn more about this issue or get complimentary troubleshooting assistance.

When you watch your video frame by frame, do the ball and the racquet stay sharp or do they appear blurry? If it’s the latter, you most likely haven’t set your shutter speed correctly.

If you’re filming outdoors during the day, a fast shutter speed won’t compromise the brightness of your image much. The sun is such a strong light source that your camera sensor is likely to receive enough light even though the shutter is open only very briefly each time. Under indoor lighting conditions, however, you would need a large enough camera sensor to be able to record at a fast shutter speed without getting too dark an image.

High-resolution cameras are affordable and easy to find nowadays. Keep in mind, however, that more and more club players watch video primarily on mobile. On small screens, 4K is unnecessary. Full HD (1080p) or even Standard HD (720p) is more than enough to deliver an excellent video watching experience.

In most cases, it’s wiser to allocate your processing and storage capacities not on resolution but elsewhere. For example, compression is what often really matters in terms of delivering crisp images, so it may be a good idea to record at a lower resolution and minimize compression as much as possible.

Thank you for texting Ocams.
Please check your phone shortly.
Oops, something went wrong during the form submission. Please email us at tennis@ocamsclub.com so we can resolve this for you. Our apologies, and thank you.